Although some of these worked, others, due to the strong wind, ended up damaging the lines of Austrians, putting the attack strategy into sharp discussion. The following examples and prototypes of unmanned aircraft made their appearance during the First World War. An example is the “Aerial Target” in 1916, which was controlled by radio control techniques. The aircraft was controlled thanks to a series of internally mounted gyroscopes.

In the period of time between the world wars, the technological development allowed the various companies and military troops to carry out projects that led to the conversion of some models of aircraft in the APR (remote piloted aircraft) to the birth of the first unmanned systems that could be launched by warships and controlled by an autopilot.

The first large-scale production of the APR dates back to the period of the Second World War thanks to “Reginald Denny”, who during the First World War served the British army and then moved to the United States. In the 1930s, the young English engineer presented one of the first drones to the US Army. The US Army was initially very wary and asked, “What do we do with a toy?” Later the US authorities changed their minds, starting an adventure that has gradually shifted from military employment to the civil one. The etymology of the word “drone” is still shrouded in mystery. Currently there are numerous metaphors that trace the APR back to an insect.

In modern English, in fact, the term “drone” means drone, the male of the bee. Some clues suggest that the name derives from the noise similar to the drone buzz that the first models produced. Furthermore, it is curious to discover another connection: in the first years of use, the drone was used almost exclusively as a flying target for aeronautical exercises. As the drone had no active role, it did not affect directly. If at the beginning the word “drone” was given a passive connotation, today we can certainly say that these remotely piloted vehicles have overwhelmingly shifted from being targets to real protagonists and interpreters of a very sophisticated and constantly evolving technology.

Following the rapid technological progress recorded during the 2000s and thanks to their versatility, the APRs began to be used also in the civil sphere, where they are used in different areas such as: the cinema sector (aerial shots, commercials, etc.) ; industrial sector (thermal surveys, photogrammetry, mapping, …), agricultural sector (precision agriculture, soil status analysis, crop analysis, …), environmental sector (environmental monitoring, timely interventions, risk analysis, …) In recent years, technological development has allowed the large multinational manufacturers (DJI, PARROT, WALKERA) to design drones with state-of-the-art security systems that allow them to work with extreme precision.

« What are drones, how they work and which drones to choose » Important Things You Must Know Before Getting a Custom T-Shirt Printed 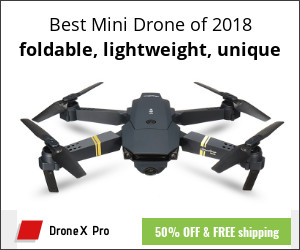